There’s often a division in the raw food world (and other health spheres) when it comes to fat versus fruit. Cultivated fruit gets plenty of flack for being sweeter and less nutritious than its wild counterparts—changes attributed to human intervention and centuries of selective breeding. And the issue of ‘man-made’ modern fruit sometimes becomes an argument for limiting its consumption and eating low-sugar fruits instead, like avocados and tomatoes.

I’ll be writing about the wild/cultivated fruit issue in a later post. In the meantime, I find it interesting that avocados—one of the most popular fat sources on a raw food diet, and the staple of many low-sugar raw cuisines—have managed to dodge criticism about their humongous size. I guess it’s hard to picture avocados being anything other than the plump, fleshy fruits we see in common cultivars like the Hass. But what most people don’t realize (even fruit-and-vegetable-savvy raw foodists) is that commercial avocados are a far cry from what they were originally. In fact, without deliberate cultivation by humans, avocados are small, fibrous, large-pitted, and yield only a tiny layer of that creamy green flesh we all know and love. It’d easily take ten wild avocados to get the equivalent flesh of one Hass, if not more.

That isn’t to say we should avoid avocados or that they’re bad for you—certainly not! But for folks interested in eating foods that are close to their natural state, it’s helpful to understand that these so-called “alligator pears” have been bred specifically for their size, fat content, and copious edible flesh. They aren’t quite so luxuriant in the wild.

Curious what these uncultivated avos look like? Check out the pictures below, and click ’em for a larger view.

(Images are courtesy for avocadosource.com) 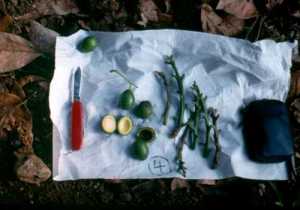 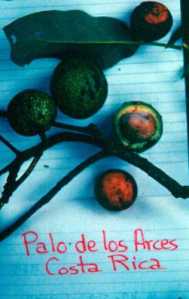