Important disclaimer: In light of new information, this post needs to be taken with a really whoppin’ huge grain of salt. It turns out Tuoli was “feasting” on the day the survey crew came for China Study I, so they were likely eating more calories, more wheat, more dairy, and so forth than they typically do the rest of the year. We can’t be completely sure what their normal diet did look at the time, but the questionnaire data (which is supposedly more reliable than the diet survey data) still suggests they were eating a lot of animal products and very little in the way of fruits or vegetables.

At any rate, I recommend not quoting this post or citing it as “evidence” for anything simply because of the uncertainty surrounding the Tuoli data in the China Study. Please see the following posts for more information on the issue of Tuoli’s accuracy:

As I mentioned in the previous post on dairy consumption and disease in China, there’s a fascinating little county by the name of “Tuoli” situated in northwest China—a place quite worthy of nutritional study, due to their unique diet.

Where they eat a lot of this: 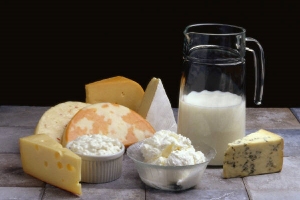 But not a lot of this:

The Tuoli diet is so abnormal for China, in fact, that T. Colin Campbell et al omitted this county from analysis in several China Study papers—such as “Vitamin A and cartenoid status in rural China,” published in the British Journal of Nutrition:

One county (Tuoli County in Xinjiang Autonomous Region), composed primarily of an ethnic minority population of herdspeople, had disproportionately high values for retinol, lipid and protein intake due to an exceptionally high intake of animal foods. This ‘outlier’ was not included in the analysis, to characterize more accurately the average intakes of the rural Chinese population and to avoid the undue influence of one data point on the results.

Given the prevailing beliefs about nutrition and health—such as saturated fat and cholesterol as a cause of heart disease, the necessity of fiber for colon health, the immunity-boosting properties of fruits and vegetables, and the dangers of a diet high in animal fat—it would seem the Tuoli should showcase the health woes that come from breaking every rule in the diet book.

But is that the case?

First, let’s take a closer look at what he China Project data has to say about these Tuoli folks.

In terms of macronutrients, the Tuoli consumed an average of 185.6 grams of fat, 172.5 grams of protein, and 322 grams of carbohydrates per day. Average energy intake was a whoppin’ 3704 calories, and average fiber intake was 17.9 grams per day—only slightly more than your run-of-the-mill American.

The average diet of all counties studied in the China Project is clearly carb-based, low in fat and protein (as a percent of total calories): 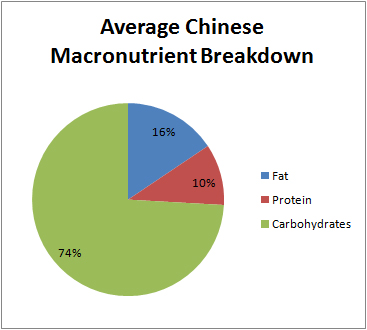 In contrast, the Tuoli diet is nearly half fat:

Basically, these folks live on dairy, meat, and wheat, and refuse to eat their vegetables. Sounds like some Americans I know.

If the Tuoli’s meat-and-dairy-heavy diet is the source of disease, we’d expect to see these folks facing more chronic conditions than the regions eating plant-based diets. To test whether this is the case, let’s compare Tuoli with the 13 counties in the China Project that consumed less than 1 gram of animal protein per day—the closest thing we have to Chinese vegans.

I’ll be putting these all in a bar graphs, but to prevent an uber-cluttered x-axis, I’ll just use numbers corresponding to each county:

Before getting to the mortality statistics, let’s look at some basic blood markers for heart disease. Here we have total cholesterol of the above counties, lined up side-by-side for comparison.

As you might expect, Tuolians* have higher total cholesterol than most of the near-vegan counties, although it’s still a healthy number by American standards. However, the difference between a couple of those counties isn’t all that profound: Tuoli’s cholesterol is tied with that of Shanyang and lags a bit behind Taixing, both of which consume only trivial amounts of animal products. Curious, indeed. Obviously, something other than animal product consumption affects blood cholesterol.

*”Tuolian” may or may not be an actual term.

Next, let’s peek at triglycerides—a type of blood fat that, in high amounts, can raise your risk of heart disease.

It seems Tuoli is pretty much neck-and-neck with the plant-eating counties. By American standards, triglyceride levels between 150 and 199 are considered borderline high, and lower numbers are considered normal—so only one county, a near-vegan one, had values outside a healthy range.

First up: Death from all causes (per 1000 people under the age of 65). Remember, Tuoli county is the red bar; the blue bars represent the near-vegan counties in the China Project that consumed less than 1 gram of animal protein per day on average.

Okay, so the Tuoli don’t have a higher death rate than the near-vegans. In fact, Tuoli’s total mortality rate is lower than 11 of the other counties and higher than only two.

But what about cancer? Let’s look at mortality from all cancers for Tuoli and the plant-lovin’ regions. Again, Tuoli is the red bar, and the near-vegan counties are the blue ones.

How ’bout them apples? Tuoli doesn’t appear to have higher cancer rates than the near-vegan areas. Eight counties have higher rates and only five have lower ones, leaving Tuoli hovering near the lower-middle end of the spectrum.

Next we have mortality from myocardial infarction (heart attacks) and coronary heart disease, per 1000 people. Tuoli is red, near-vegan counties are blue… you know the drill.

Surprised? Despite a massive intake of cholesterol, saturated fat, calories, animal protein, and all those other horrors ascribed to declining heart health, the Tuoli have relatively low levels of coronary heart disease and heart attacks. Seven near-vegan counties have higher rates than Tuoli, and six have lower rates.

And now for stroke mortality (per 1000 people).

And since lack of fiber is supposed to harm colon health, here is a comparison of colon cancer and rectal cancer mortality (per 1000 people) between the plant-noshing counties and the vegetable-phobic Tuolians. 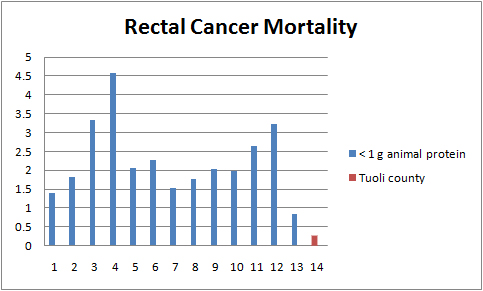 Looks like they’re doing pretty dandy without much fiber, right?

But what about leukemia? Let’s check it out:

As you can see, Tuoli isn’t significantly worse off than the near-vegan counties in terms of chronic disease. Total mortality rate is lower, cancer rates are lower or similar, heart attacks aren’t more common than usual, stroke rates are average. From this data alone, we’d have no basis for claiming that eating two pounds of dairy per day (and minimal vegetation, aside from wheat flour) is less healthful than consuming a mostly vegetarian diet. For sure, this data fails to support Campbell’s claim that chronic disease rates climb when animal protein intake rises.

(And as you’ll see in an upcoming post, it’s pretty surprising that the Tuoli had low rates of cardiovascular disease while eating high levels of wheat—but we’ll get to that later.)

Why aren’t these people sick and diseased?

We have plenty of evidence showing hormone-pumped dairy, grain-fed meat, pasteurized and homogenized milk, processed lunch meats, and other monstrosities are bad for the human body. No debate there. But we do have a woeful lack of research on the effects of “clean” animal products—meat from wild or pastured animals fed good diets, milk that hasn’t been heat-zapped, antibiotic-free cheeses and yogurts, and so forth. Perhaps the best data we have is from observational studies of isolated or primitive peoples (such as those studied by Weston A. Price), but those lack detailed documentation about mortality rates and don’t usually meet standards of scientific rigor.

In other words, this is one area where nutritional research is pretty deficient.

Is it possible the diseases we ascribe to animal products aren’t caused by animal products themselves, but by the chemicals, hormones, and treatment processes we expose them to? If the Tuoli are any indication, this may be the case. Hopefully future research will shed more light on the matter.