Did we adapt to cooked food, or is that idea—ahem—half-baked?

In part 1 of this “optimal human diet” series, I mentioned that there is no single, exact diet that will deliver perfect health for everyone. We’re tough cookies, us humans—and we only made it as far as we did by adapting to whatever happened to land on our evolutionary dinner plates. Mastodon meat, sweet little figs, plant roots—we made food of it all.

Even so, there’s a notion in the raw food world that we’re still best-suited for the type of diet we ate back in the good ol’ days. You know, before we exited the tropics, conquered all corners of the planet, and invented the deep-fried Krispy Kreme (which surely triggered the downfall of humanity). Maybe you’ve heard claims that we haven’t adapted to cooked food at all, that we’re designed to be vegan or vegetarian, and that our digestive systems still look like those of other fruit-munchin’, leaf-chompin’ primates.

But do those beliefs hold up to reality? Let’s take a look.

There’s no doubt that we have plenty of anatomical similarities with other primates. We do share a good chunk of their genes, after all—especially chimpanzees, bonobos, and orangutans. In fact, some researchers have argued that chimpanzees should be reclassified under the same Homo genus as humans because we’re so similar, although this is pretty controversial and it’s been challenged by more recent research.

All in all, humans have the same general digestive structure as apes: a single-compartment stomach, a small intestine, a cecum and appendix, and a colon. Pretty simple.

A visual representation for your viewing pleasure (humans are the striped bar): 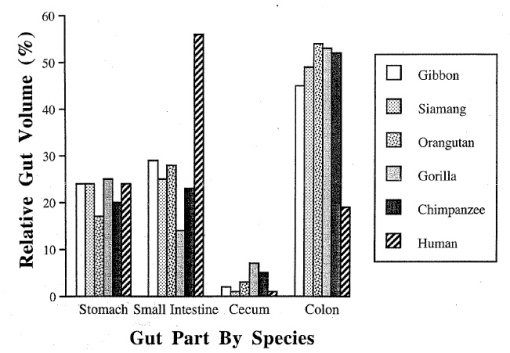 As you can see, there’s not much difference in relative stomach volume—but other primates have a whole lotta’ colon, and we’ve got a whole lotta’ small intestine.

So what does that mean?

In simple terms, a big colon is good for handling “low-quality” foods like tough leaves, stems, and fibrous fruits—things that require a lot of digestive work to break down. Primates that eat boatloads of greens, like gorillas, have a whole army of microbes in their colon that digest cellulose and convert it into an energy source. That’s a process called “hind-gut fermentation.” Humans aren’t so lucky; we can digest some forms of fiber, but much of it passes right through us without delivering nutritional value. Our colons aren’t big enough to host enough little organisms to ferment things as effectively as other primates do.

On the flip side, a big small intestine (is that an oxymoron?) is perfect for digesting high-quality foods that are dense, smaller in volume, and easy to break down. That includes soft fruits, animal foods, cooked foods, tender leaves, and perhaps items that have been pre-processed through chopping or grinding. Even our modern-day blended and juiced foods make our small intestines happy, because that pre-processing translates to less digestive work.

In other words, humans are adapted to a softer, more compact diet than other primates. Our bodies have moved away from extremely high-fiber cuisines and are better suited for foods that require less digestive effort.

What caused the change in colon and intestinal size?

This is one of those mysteries that researchers like to argue about, but no one has a definite answer for. What we do know is that the change was sparked by a shift to more energy-concentrated diets. It could have been:

More likely than not, it was one (or both) of the first two. Our shrinking colon size is pretty clear evidence that our bodies started adapting to the energy-dense structure of cooked food and meat, since we no longer had to rely primarily on bulky, super-fibrous plant foods.

Does that mean we should all be cooked omnivores?

Even though our bodies have grown accustomed to denser diets than our primate friends, that doesn’t mean cooked food is mandatory or  that veganism is impossible. What it does mean is that the most successful human diets are going to have some form of concentrated nutrition. On a completely raw vegan diet, the options are very sweet or fatty fruits, nuts, sprouted grains, coconut, seeds, juices, or blended foods. Although I don’t recommend a lot of gourmet-style raw meals and dehydrated snacks in general, those fit in here as well. On a raw non-vegan diet, those dense items could be animal products like raw dairy, fish, eggs, honey, or raw meat. On a high-raw diet, you could opt for steamed root vegetables, grains, cooked legumes, and so forth.

Basically, what we can’t do is live off of leaves and occasional fibrous fruit for extended periods of time like most primates can. Thanks to our dwarfed colons, we would starve.

Shouldn’t we be vegan because meat causes disease?

I’ve said it before and I’ll say it again: veganism is an ethical choice, not a dietary ideal. Today, we know enough about nutrition to plan or supplement a vegan diet to avoid deficiency, but eschewing all animal products won’t necessarily make you healthier than eating a diet containing a portion of high-quality animal foods.

Part of the reason animal foods get a bad rap these days is because of our farming practices. Agricultural products like dairy, farmed meat, and eggs from grain-fed chickens are a far cry from anything we encountered in the 2 million years prior to agriculture. And the state modern animal products (along with the often-horrific way farm animals are treated) is particularly disconcerting. Along with carrying high levels of growth hormones, pesticide residue, and other harmful substances, grain-fed animal products have a far different nutritional composition than wild animals eating their natural diets. And that spells trouble for the humans who eat such foods.

From G.J. Miller, "Lipids in Wild Ruminant Animals and Steers," published in the Journal of Food Quality, 9:331-343, 1986; image courtesy of EatWild.com

It’s certainly no surprise we find high rates of disease linked to these foods. Although animal products and byproducts have been components of our diets for quite a while, “franken-meats” pumped full of hormones and antibiotics are the equivalent of space aliens in our digestive systems. They just don’t belong there. At all.

A word on cooking

Although we have adapted to the energy density of cooked food, we haven’t necessarily adapted to all the new substances cooking produces. Charred meat, for instance, contains compounds called heterocyclic amines (HCAs) known to contribute to cancer in humans. Acrylamide, another human carcinogen, occurs when many starch-based foods are heated. Maillard molecules and glycotoxins crop up in browned foods, and these suckers contribute to inflammation and other unpleasant conditions (research here is still in its infancy). And eating high-temperature cooked food may also accelerate aging due to advanced glycation end products.

In other words, there’s good reason to include plenty of fresh, raw foods in your diet even if you don’t jump on the 100% raw bandwagon. And high-temperature cooking seems to stir up all sorts of trouble, so if you prefer to eat some cooked food, gentle methods like steaming are the safest way to go.

There might not be a single optimal diet for humans, but health-producing cuisines—especially ones with a reputation for healing ailments and reversing chronic conditions—typically have a few things in common.

If you eat a diet that fits the above description, raw or otherwise, you’re probably well on your way to staying healthy. Even though I prefer a completely raw diet for the level of clarity and surging energy it brings, I have no reason to think that a 100% raw diet will extend a human’s lifespan or offer more immunity to disease than a mostly raw diet with well-planned cooked foods.

But regardless of what you put in your mouth, remember that an optimal diet is one you can sustain—and that doesn’t knock your whole life off kilter by making you socially, mentally, or emotionally imbalanced. Diet is only one component of health and should never become the driving force in your life.