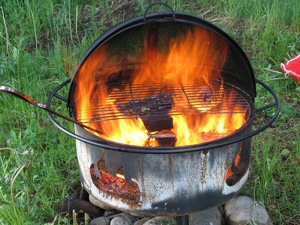 Did we adapt to cooked food, or is that idea—ahem—half-baked?

In part 1 of this “optimal human diet” series, I mentioned that there is no single, exact diet that will deliver perfect health for everyone. We’re tough cookies, us humans—and we only made it as far as we did by adapting to whatever happened to land on our evolutionary dinner plates. Mastodon meat, sweet little figs, plant roots—we made food of it all.

Even so, there’s a notion in the raw food world that we’re still best-suited for the type of diet we ate back in the good ol’ days. You know, before we exited the tropics, conquered all corners of the planet, and invented the deep-fried Krispy Kreme (which surely triggered the downfall of humanity). Maybe you’ve heard claims that we haven’t adapted to cooked food at all, that we’re designed to be vegan or vegetarian, and that our digestive systems still look like those of other fruit-munchin’, leaf-chompin’ primates.

But do those beliefs hold up to reality? Let’s take a look. END_OF_DOCUMENT_TOKEN_TO_BE_REPLACED

Unfortunately, it kind of is. END_OF_DOCUMENT_TOKEN_TO_BE_REPLACED